HEREWITH THE WORDS FOR HASH 1024, Aveton Gifford according to Viz (with a little help from her friends) :-

The Hash assembled on a warmish evening, a hopeful harbinger of balmy summer nights to come? Your intrepid reporter was dutifully filling in for the Invisible Woman, who, as usual, was nowhere to be seen.

Barbarella asked for any spare Sainsbury Vouchers to support her good works. Piltdown Man relayed an invitation from Taunton Hashers to run with them over the bank holiday weekend.

Hare of the evening Jerk smiled knowingly, explained a complicated system of check-backs, then blatantly lied. Dead-Man-Walking absolved himself of route responsibility mumbling something about just being a bitch and frisky bullocks?? (Is that medically possible, or perhaps I should change my hearing aid battery)

The balmy night soon turned to a barmy one, as the very first dot led straight into and across the river. So gaining those cunning hares the record for “Fastest soaking of an entire hash”. (The Splash-hash award perhaps?)

Things could only get wetter, as squelching noisily past the pub various FRB’s searched vainly and in confusion for a dry route. Predictably, none was found and hashers turned troglodytes as they crawled commando-style through a very-narrow, very-wet, culvert.

Many of the more senior hashers diverted around the obstacle, (Hekkel, Jyde, Gomez, Morticia, you know who you are) leaving their more youthful running mates wishing they had packed their water wings and spare underwear. The Blue-ladies (Turqs?) were particularly plucky, so hats off to you chaps!

More mud and mayhem was to follow culminating in the slower hashers swimming for their lives against the incoming tide. Or so they said, because your intrepid reporter was by now busy reviewing the ales at the Fisherman’s Rest. Hereinafter therefore, in that fine tradition of tabloid journalism, I will simply report hearsay as true fact and hope Lord Leveson is busy this week.

Whisperer was left stuck in the mud. Dead-Man-Walking was required to rescue Squashed Balls. (By boat?) Flage-no-lay did something unspeakable with a towel belonging to Rent-Boy.  Something equally unspeakable was done to an Aubergine. (Was this legal?) Piddler exposed his whatever in the car park. (Does he know about the covert camera?) IVF managed to stampede the frisky bullocks. (Is that a euphemism?)  Spotty Botty got all competitive and elbowed Overshot, Steve Coe style. (Those boys simply have too much energy)

A birthday dirge was sung to Jelly Baby (still looks 21) and Topshelf (still thinks he looks 21) Down-downs were duly awarded to U-bend for bad hurdling technique and Whisperer for his 300th T-shirt. Beer and praises for hares and good wishes to the pub.

Doris arrived safely back by 9.30pm thus making it by definition a very well laid hash. And so said all of us!

The final words must go to our newbie-of-the-night Sarah, who was heard to say, “I’m wet, bruised and lacerated, so I’ll certainly be coming again!”

On On to Kingston, warmer nights and, more importantly, warmer rivers! 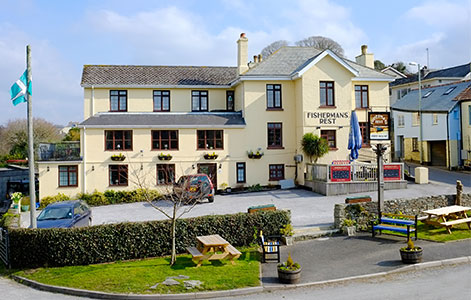 There’s a large free car park (The Timbers) on the opposite side of the roundabout to the pub.  Take the turning to the tidal road.  We normally circle up in this car park. The Tidal road cuts off the way towards Bigbury and IS too deep to drive through when the tide’s in.