So you want to lay a Hash Trail?

Hashers who lay a Trail are known as Hares. Laying a great Hash Trail is an art not a science. Ideally the Trail will provide a good mix of terrain, plenty of shiggy, minimal road running and most importantly, keep Hashers of different running speeds together by the use of longer and shorter options that lead the longs back through the pack again, use of false trail that send faster runners off in the wrong direction to return through the slower runners ‘ahead’ of them. If everyone arrives back at the On Down within a short time, job done!

If you’re thinking of laying a Trail, it’s probably a good idea to accompany an experienced Hare on one of their Lays, or ask them to go over your planned route with you. Given that SH4 has been Hashing in the South Hams once a week for well over 1000 Hashes and counting, it’ll be unlikely that you’re going to surprise everyone.  There’s going to be lots of people trying to second guess your Trail, “We were here 8 years ago, I remember that farm dog sitting there…”. Ignore them.

Check with the Hare Razer (currently Traffic Jam) to schedule in your Hash. 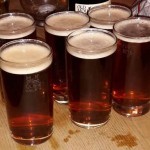 Always check out the pub well in advance, pop in and chat with the Landlord to let them know that you’d like to bring in 40-60+ thirsty, hungry good natured Hashers into the pub. Explain that everyone gets changed BEFORE coming into the Pub and ask if Dogs are allowed or not. Many will doubt that this many people will turn up, but it’d be great if there was enough Bar Staff on to serve the Hashers quickly.

If the Pub serves food, so much the better, many are happy to put on a special “Hash Menu” of cheaper basic dishes such as Cheesy Chips or similar. Also remember to try and politely blag at least 6 Half Pints of Beer for the “Down Downs”. Most Publicans are glad to oblige. Make sure the Landlord tells their Staff if about the Down Downs if they’re not going to be there on the night. Some pubs love us, others don’t want those” nasty, smelly, noisy Runners putting off my regulars”. There’s plenty of Hash friendly pubs, so if there’s any grief, move onto another.

If the Landlord won’t supply the Down Downs AND you still want to use the Pub, that’s fine but you’ll need to fund the purchase of the Down Downs yourself. There has been a couple of occasions where the Landlord agrees to the Down Downs but either changes their mind on the night or forgets to tell the bar staff. Pay for the Down Downs, but see the current Hash Cash who’ll reimburse you.

Hashes are generally laid on Public Footpaths, Bridal Ways, Byeways and Green Lanes and in some cases on Right To Roam land. Although there’s no legal requirement to check in with Land Owners over whose land these paths cross, it’s worth a quick heads up out of courtesy. This can save any unexpected problems when 55 Hashers start shouting “On On” outside a Farmer’s barns at 8:30 on a dark winter’s evening. Ask if there’s going to be any Livestock in the fields so that you can inform Hashers about any Dog restrictions (they should be kept under control or on a lead in any case). They may also be able to point out alternatives to your route that involve more shiggy, speak nicely and some Landowners are amenable to letting you on their land by prior arrangement.

You should remind Hashers to follow the Country Code

You should take particular care to avoid planning a route that may disturb Wildlife, 60 Hashers running through an area of Badger Sets in a wood does not undisturbed Badgers make. Similarly, take into account that Livestock with young can be especially grumpy, more so when there’s dogs with the Hash. This doesn’t mean you can’t go through a Field that has say Cattle with calves in, just that you should flag the Hash with the issue beforehand e.g. “No Dogs on the Longs due to Livestock” and make sure that this is announced in the couple of Hashes beforehand. There’s many areas of Special Scientific Interest in the South Hams and care should be taken that your route doesn’t put these at risk of damage, especially given Hasher’s inbuilt desire to take short cuts.

How long is it now Sir?

If you aim for a maximum of about 6 miles for the Longs and 3 miles for the Shorts, you’ll be in the ball park. Based on our normal 7:30pm start, aim to get everyone back to the Pub for 8:45-9:00. If the shorts get above 4.5 miles there’ll be raised eyebrows and above 5 you’ll be getting calls from Personal Injury Lawyers for compensation for excessive knee joint wear. The Longs will be more forgiving of a longer Trail, though you’re recommended not to try to top Goolie’s “A little over 5” that was in fact well over 8 miles!

At the Circle Up, everyone likes to know “How far is it?” so they can decide which Trail to follow. It’s a good idea to be as accurate as you can, however some Hares are notoriously inaccurate and under estimate the length of the Trail dramatically, sometimes they even do this inadvertently! A good tool for helping with this is the free Route Plotting site plotaroute.com. This allows you to set a “Footpath” mode and click out your route. It’s actually a great way to try alternatives and shows paths that you may not know about.

Boots on the ground

There is NO better way of planning a Hash than getting your trail shoes on and trying out your planned Trail.  You’ll see things unnoticed from plotaroute or a map, maybe a little loop is possible to take in that stream crossing? if you take this trail, they’ll have to go through the muddy bog rather than the gravel path and so on. Take a 1:25000 OSGB map with you when out planning, if nothing else, you’ll be able to find your back if you get lost!

Get them out of the Car Park

Avoid a whole bunch of clever checks just 50m out of the Car Park at the start, it’ll be mayhem. Everyone will bunch up and it’ll be like a herd of sheep milling in the road. What will happen is that a few of the FRBs will try out all of the Checks whilst everyone else and their dogs will stop dead and continue gassing totally uninterested in proceedings until the On On is called. Get everyone several hundred metres away before you start your shenanigans. 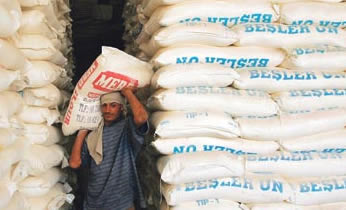 Buy some flour, lots of it. You’ll normally need several bags of flour to ensure the Trail’s well marked. Totnes style Wholemeal is not normally bright enough in the dark so get good old bright white budget flour. Don’t use Self-Raising under any circumstances. If the Weather’s wet, sawdust is a good alternative, less visible but it won’t wash away. Pine sawdust’s the best, any of the darker woods are not as visible in the dark. An old 2 litre milk container (with a hole cut in for refilling) makes a really good blob dispensing device.

Ideally lay the Trail on the right hand side of the path (announce at the Circle Up if this is not what you’ve done).  Try and keep the blobs of flour within sight of each other as a general rule, though this may be of necessity stretched if you’re throwing in some form of subterfuge relating to a Check or Check Back etc. Markings can be stretched out where there’s no possibility of any other route such as a stretch of road or enclosed footpath but should be much closer where the path ahead isn’t obvious or weather conditions are poor, for example when it’s foggy on the moor.

Remember that a good Hash will keep the pack together as much as possible. Keep sending the FRBs further so they have to keep coming back through the pack past the SCBs. The marks used by SH4 are given here on our WTF are those marks? page.

Check – A choice of routes on the Trail, only one can be right. Faster runners arrive first and some will go one way, some the other.  Try to make the false trail as enticing as possible. Once they’ve discovered the cross at the end of the False Trail the game’s up and they have to run back to the check. You can add as many options as there are alternative routes from the check so it doesn’t have to be just left or right.

Long \ Short Split – The Longs go one way and the Shorts (or Mediums) go another. The route the Longs take will normally be some form of loop that brings them back onto the Shorts trail behind the Shorts that are now ahead of them. There can be any number of Long Short splits on a Trail. However, laying a Trail where the Longs and the Shorts run what is in effect two separate routes for most of the Hash is to be avoided as the idea is to keep the pack together.

Fish Hook – Those FRBs are off again under the illusion that they’re Athletes, Throw in a Fish Hook, a sign to force ‘X’ number of Faster runners to do a U turn all the way through the pack to the back and then return through slower Hashers to the front again. Try to get an idea of the normal size of the FRBs group and set ‘X’ to that number to try and catch all of them!

Check Back – There’s another long section, no options but straight on, the FRBs will be streaming off into the sunset, what should you do?  You let them get some steam up and throw in a Check Back. They then have to stop and return back to the last blob of flour that’ll be next to a hidden path or turn unnoticed at full on FRB charge speed. Put a number next to it and they have to go back several dots. Place the Check Back at the bottom of a long hill for maximum effect, don’t worry about all the extra effort they’ll have to put in, the FRBs will probably even thank you for the extra Hill session that you’ve made them do. 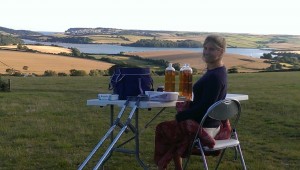 There’s not normally a Beer stop on every Hash. If you’re thinking of doing this on your Trail, ask the Hash Cash for a sub, normally up to £20 per beer stop is available.

The FRBs may ignore it completely or just scoff and dash, others may settle in for some serious nattering and noshing. Sometimes there’s a sting in the tail, an enticing cold drink on a Summer’s Hash only accessible by descending a long set of steps down to a beach! A tin of Quality Street is greatly appreciated though some Hashers go to great length to provide sweets, crisps, beer, Mulled Wine or even fairy lights and cup cakes! It’s up to you if you do or you don’t.

It’s good practice to try and arrange a reliable Hasher to follow the pack as last person on each Long / Short section as a Sweeper to ensure that no one gets left out on a cold foggy moor lost or injured. Also ensure that all Gates are shut, Some Hashes require Hashers to sign in and out,though this is not currently a requirement at SH4.