About 52 hashers gathered in the railway car park at South Brent.  Overshot gave us the history lesson (yawn) and then it was down to the hares.  All pretty straightforward and off we went although it took some of the longs to get their bearings. It was pretty chilly and the winter gear was out, hats scarves, gloves and who knows what Ging Gang was wearing under her leggings.  Did I see a hint of long johns.

It was uphill for the first two miles. Rubbery was heard to say ‘Do I not like those hills’  rather like the dearly departed Peter Taylor.  In fact Rubbery was more expressive than that.  The moorland threw up some hairy apparitions, no, I am not talking about Barbie.  For example three stallions reared out of the gloom, we were warned about them but they were very friendly and seemed please to see us.  On that note Lazy Gits bladder suffered from the cold.  By a gorse bush he answered the call of nature but like most men when weeing he was looking at his willy.  He had his head torch on and consequently hashers were treated to the illuminated Brent equivalent of the Manneken Pis sculpture in Brussels.  Lazygit wants to be careful getting it out in freezing conditions, he might get a chap on the end of it.

Top marks to Jyde, he WAS the Ugborough Beacon.  Standing out like a sentinel with a headlamp rather than a head torch, he attracted hashers to his vantage point like moths to a lamp.  You could see him for miles.  Then down we went, along lanes, tracks and dales to the valley in which South Brent nestles. Some interesting facts were to emerge in the Pack Horse Inn, a new pub for many of us.

It was Marty s birthday and she was given a wine glass which was anatomically correct in the higher regions of the female body by fellow hasher Marty.  Unfortunately she did not bring it in.  Then we heard that Dimwit opened his wife’s birthday present from Ritzo which was moisturiser.  This he applied liberally to his hands before Marty had a chance to use it herself.  Apparently Dimwit always uses moisturiser. after he shaves, he said it makes his legs lovely and smooth.

The RA Squashedballs had quite a few things to announce. Capricorns were in abundance and birthday drinks were awarded to Piltdown Man, Marty and the RA himself.  Lazy Git received a down down for bringing a new meaning to hash flash.  Heckyl and Jyde the hares also got one and finally, Ian the virgin, who shell shocked by the evenings events was introduced to our most sacred ritual.  The pub was thanked. Well done to Hekyll and Jyde for a well marked out hash on the foothills of Dartmoor. 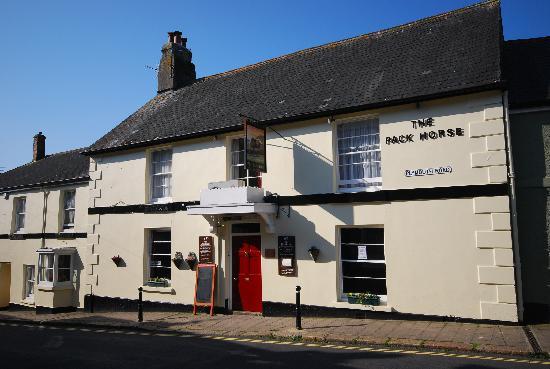