What3Words: demotion.squirts.prefer
Add This Event to your Calendar

Hare: Barbie
Hare: JP
RA: The Jerk
Scribe: To Be Confirmed
Dogs Allowed On Hash?: On Lead At Times

We squeezed our cars into the crowded car park, but we are not complaining as the pub had agreed to host us at very short notice even though it was Quiz Night and we were to be segregated from the intelligencia.

It was the coldest night of the season so far and hashers were warmly wrapped in hats, scarves and gloves as Chief Hare Barbie, made excuses for the trail, blaming meddling sheep, hungry cows and Lazy Git for any shortcomings.  It was a bit worrying when he said Lazy Git had got lost and had to ‘phone home’ (i.e: Barbie) who talked him back to the village – didn’t know where he was, but he could see Dartmoor- so that was ok wasn’t it!

There were to be two long/short splits and a walkers’ trail. We were not to open any gates and there might be some mud.

Off around the houses for a bit then up a muddy track, then a bit of road, then another muddy track, then a few fields with mud in.  There were lots of false trails which caught a few people out as they did not have crosses (Piddler was caught out a few times).  Gomez was concerned when Morticia and Traffic Jam disappeared so went back to find them and show them the right way (such a gent). We dutifully climbed gates and paddled through mud.  Pi met us in a field and directed us through.  I did the ‘short’ so I have no idea where the rest of the trail went.   But allegedly, the FRBs, led by Rear Entry and followed by Overshot, cut off a substantial part of the trail.  Bell End fell into a dark hole whilst waxing his moustache. Wet Spot also joined in the hash tonight, but didn’t stay for the pub as he had to get back to Cross Dressing. Dirty Oar from TVH got a splinter in her finger-aaah, bless.  Bit of Ruff was proudly boasting that he did the correct trail tonight (is this a first?)

The pub was thanked by RA The Jerk and 200 run tee-shirt awarded to Frenchy who will shortly be moving avec famille to live in a chateau in the Loire. 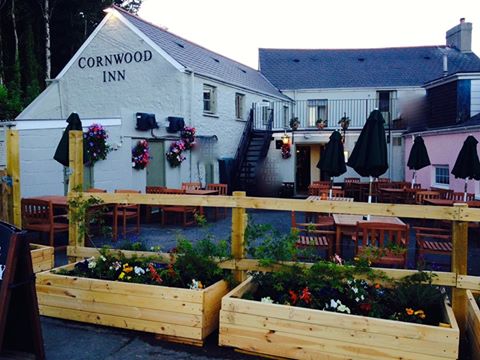