What3Words: trouser.breached.standard
Add This Event to your Calendar

On arriving at Wrangaton Golf Club with Abel Mabel, The New Family Pupster, I tried to shirk my Scribe responsibilities by hiding in the crowd.

As you will see I am writing them now so that didn’t work!!

Circle up was brief for me, mainly because I went to the loo and missed it.

Were the distances banded around.

Off went the crowd over the golf course. Able Mabel and I in hot pursuit, mainly to stop her barking with excitement as it was her first time out in the dark for a run.

The long/ short /walkers split was kindly hidden on the verge so quite a few walkers ended up doing the short.

Pete, No Name, lost his shoe in a bog.

Dead Man Walking ended up with a nose injury, instigated by Wetspot.

Some sheep jumped out at Dulux.

Re Entry shouted at some members of the public, telling them they were not on the trail.

Back at the club, cheesy chips were a plenty.

Squashed Balls was the R.A for the evening. The usual jokes ensued. He named Heidi, poor girl is now to be known as DEEP THROAT. ( She didn’t know what that meant until she was told to Google Linda Lovelace)

Down Downs went to:

After all this excitement, Squashed Balls comes over to me and hands me a golf ball. I am a  little confused, he tells me as I am scribe this week  I need his notes!! Completely forgot I had been volunteered  to scribe. Notes on a golf ball!!

ON ON next week to The First and Last in Ermington for home made pizza!! 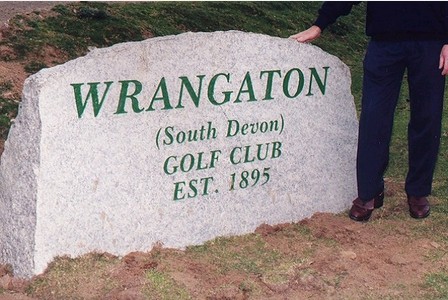 
The relaxed and friendly atmosphere in the Clubhouse and Conservatory restaurant make it an ideal place to enjoy a delicious snack, drink or perhaps a traditional Sunday lunch to round off your day.  Our prices are reasonable and the food is delicious!
Follow these easy directions to find us ….
Directions from Plymouth